Even if you are not a parent you can still still help the local schoolchildren with your grocery store purchases - without spending any extra money yourself.

Schoolpop - if you buy purchases from online merchants using schoolpop as a gateway, the school gets a significant portion of the profits. Major online stores are included - Discovery Store, LL Bean, etc. etc. Please see the entry points for the individual local schools below.

Boxtops offers another online shopping gateway, and the percentage that goes to your school is quite explicit. Some of these can be significant, for example 5% at Target. The program is limited to K-8 schools. escrip also has an online gateway. If you registered your Safeway card you are already registered there.

Some actual box tops are also worth 10 cents each to neighborhood schools that participate in that program. These are mostly from cereal and baking items (pdf list).

Office Depot has its own 5% program, but you must inform the cashier at every check-out and it works only if you are purchasing certain school supplies.

And if you are a parent with a child in the TP schools, public or private, you can help us by carrying back school library books that have been returned here by mistake.

What ever became of the Montgomery Journal? It disappeared and was subsumed, with the other Journals, into the Washington Examiner which recently published a short article on slavery in Montgomery County. The county had been trying to publicize the problem, asking people to be aware, to call 911 or 1.800.599.9291 if they have any suspicions.
See also:

For more information on slavery and its many forms we have this recent 2 volume reference work:
R 306.362 HISTORI The Historical encyclopedia of world slavery

The IT lab people at Montgomery College - Takoma Park have posted a list of restaurants within walking distance of the campus or accessible by the free downtown Silver Spring van. As the college is on the very edge of the city, most of the listed eateries are in downtown Silver Spring. The only Takoma Park ones included are those on Carroll and Laurel, near the clock. Don't forget that we also have many excellent small restaurants along both University and New Hampshire Avenues

We don't buy City Crime Rankings because it is essentially a recompilation of the data from the Uniform Crime Reports which we do have. It does the 6th grade math for you. Here is how you can do it for yourself. To obtain a rate, divide the number for the crime of your choice by the population figure. Then multiply by an appropriate number to get the "rate per xx inhabitants" you want.

Please note: The tallies will be close to those published by individual cities but not exactly the same, as some crimes are subsequently reclassified, the FBI no doubt makes an occasional typo, etc.

(Edited March 26 2006 to note: the TP Police Department is again publishing the local crime tallies on the web)

Here are some examples of tables constructed using that method (Just to encourage you. No guarantees as we are librarians not statisticians. Go look up the data and make your own constructs.)

All three have local police departments

An aside: Have you looked at the SocioEcon mapper. We have no print equivalent.

Here are our pictures (approach them with scepticism - please make your own) followed by the source data from which we constructed them. 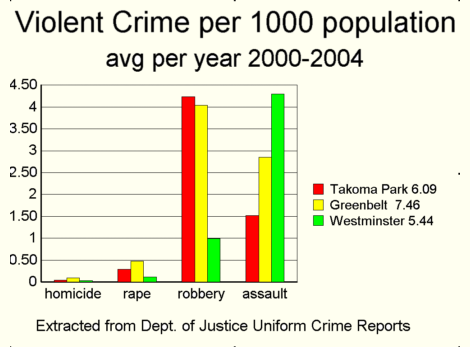 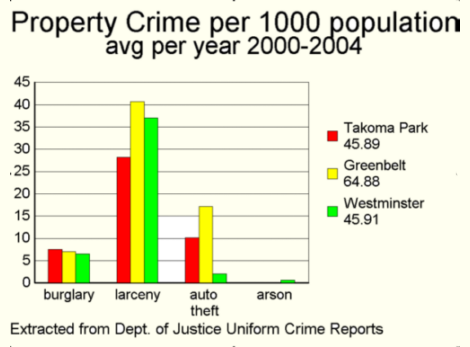 
Note: The population estimate for Takoma Park for 2000 seems oddly inflated, but that is the number used by the FBI.

The library will be closed November 24th and 25th.

Open again at 10 AM on Saturday, November 25th.

And we will be open regular hours today, Wednesday the 23rd. Until 9 PM.

Nov. 17th. But whenever you are ready (or thinking about getting ready) here are some very good support sites with lots of useful advice and comfort:

Tonight, Wednesday November 16th, 7:30 PM. At the library. Radio Rules. Local radio producers share their work and talk about where you can listen to audio and how you can make your own. (This program is part of the 2005 Takoma Park Film Festival.) 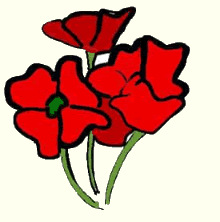 The library is closed today.

Here dead lie we because we did not choose
To live and shame the land from which we sprung.
Life to be sure, is nothing much to lose;
But young men think it is, and we were young.

A pdf version of the full results

This is the Gazette story.

What if people lived closer to their jobs? to transit?
What if new roads were built?
PowerPoint presentation of the scenarios
Linux/Mac/Windows open source users: download the file, open it in Impress (part of the openoffice.org suite) and hit F9 to start the slide show.

State, County and City representatives will be present.