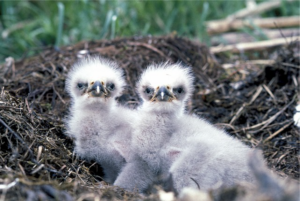 We've been alternating the stream on our behind-the-circ-desk wall screen between the Savannah owls and the National Arboretum eagles.

But there are many other cams we keep an eye on behind the desk - the Wellesley ravens, Cornell hawks Ezra and Big Red, Baltimore peregrines, little Bella, lots of Ospreys, and many other eagle cams.

Here are the eagle cams we have bookmarked. For up-to-date-news and links to other other eagle cams, monitor Eagleholic

Justice and Liberty at the DC Police Academy - hatch on 03/26.

Wisconsin - Eagles for kids Long running soap opera. Don't get attached to the eggs as once again they probably will not hatch. Father eagles need good parenting skills and they just don't seem to have them here. Nevertheless this is fun because the daily log maintained by local school kids is a delight.

Decorah Iowa - as at this writing there are 3 eggs.

Hillsborough NJ - Duke Farms - hatch on 03/26. Check their blog for updates - and they offer an e-book about their eagles (read online).

Pittsburgh along the Monongahela River. In 2013 when a storm blew the nest down, the parents managed to raise their eaglet on the ground.

Prefer owls?
Texas has some very weird barn owls. Dash and Dottie just hunker down all day. Quite soporific. (According to their twitter feed they now have an Easter egg.)