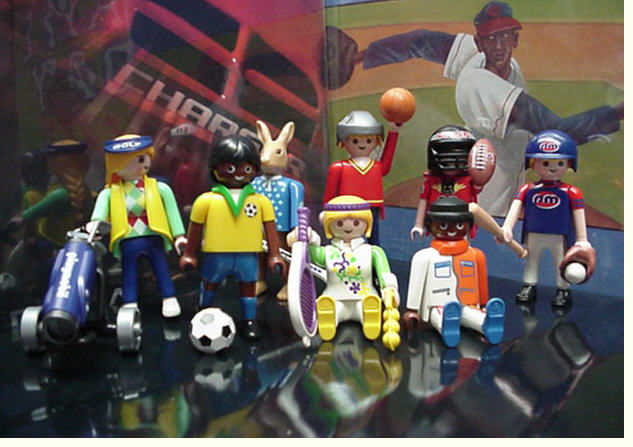 On the sports quest and in a hurry? Race to the bottom of this post for a short list of especially good books.

Interested in how librarians decide what book goes where? Interested in being able to just walk confidently to the section that has the books you want? Continue on.

Now for the rather odd breakdown of these 790s:

So a lot of stuff has to go in 796. Everything from football to kite flying, but no swimming or skiing. Before you read how the 796 sports are classified according to Dewey you might want to think about all the sports you know and how you might group them. Imagine some sort of super-sorting hat. Finished? Did you distinguish between team and individual sports? Dewey didn't.

Okay, this is the Dewey way, in which baseball is closer to croquet than it is to football and field hockey is unrelated to ice hockey.

What is the Dewey number for world series games? 796.357646
For traveling medicine shows? 791.1
Dewey lived in a very different world.

Please remember, the biography of a sports person will be found in the section for that sport. But sports fiction will be scattered about in the many fiction sections. We have a lot of great sports fiction - from Frank and Ernest Play Ball to The Iowa Baseball Confederacy. In the children's room these books will be identified by a red label, in the adult room you are on your own.

Here is the promised special list for the questers.

__ Local attorney and author Fred Bowen has written several sports novels based on true events, including Full Court Fever, On the Line, and Playoff Dreams (all are J PA).

__ Matt Christopher is perhaps the most popular sports author for kids, writing both novels and non-fiction. Our library has a number of Christopher's books, including: Football Fugitive (J PA), The Dog That Pitched A No-Hitter (J FIC CHRISTO), Baseball Jokes and Riddles (J 818 CHRISTO). 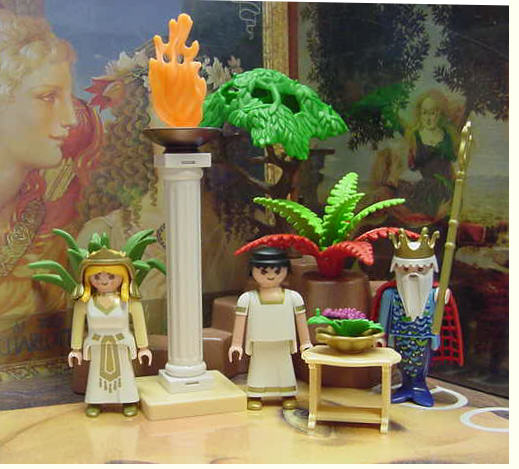 Did you get a myth quest? You are not limited to the Greek/Roman myths you learn in school (though we have many wonderful books on those) but consider Norse myths (Wóden's Day, Ţunor's Day, Fríge's Day), African myths, Native American Myths and so on. Everyone has myths.Many books of mythology sit scattered about in 290s, but myth is a rather vague category and can overlap into legends and magic (398.4) and many other unexpected locations. Example: Star Tales by Ian Ridpath which is in 523.8.

And you must read (staff picks, multi-stars) :

For adults. Neil Gaiman's American Gods, which won both Hugo and Nebula awards

For children: The three (so far) books in the Percy Jackson & the Olympians series by Rick Riordan:

And in the reference room: Man, Myth & Magic : the illustrated encyclopedia of mythology, religion, and the unknown (21 volumes but they're skinny). Want to find the Tupi myth about the fight between the anteater and the jaguar? It's in here. (This set was a gift from the friends of the library. Please join.)

And for kids (and adults) who enjoyed the Riodan books: try other fiction based on Greek mythology.

Music? We do have some parts of the Ring Cycle as sound recordings, the printed librettos and graphic novel versions as well. Our CD collection includes Handel's Semele. Many other operas based on Greek myth, including Elektra, Orfeo ed Euridice, La Belle Helene and Ariadne auf Naxos are now widely available on DVD.

Art? Everywhere. Myth has always been a major subject (the major subject?) for art in most cultures. Look through our 34 volume (and they're not skinny) Dictionary of Art, or browse through our oversized circulating book section. Need help finding them? Please ask at the desk.

DEITY OF THE DAY

Books of cartoons and comics, as well as graphic novels, usually fit into a Dewey section reserved for drawings, 741.5, and we have books there that range from Calvin and Hobbes to classic manga. Scores of books, a great collection. We shelve these books in three locations: for adults, for teens, and for younger children - as a rough sort of guide as to content.

Occasioally a cartoon book will be classified by the subject instead of the style. A Cartoon History of the District of Columbia is not in drawing but in DC history 975.3, so don't feel restricted to just the 741.5 books if you are on a cartoon quest. Another example is What do authors do? by Eileen Christelow which you can find at J 808.068.

Library staff member Dave Burbank, trained in both theater and art, designs our Summer Quest. If you have not seen his art, please come in. Dave also maintains our graphic novels wiki, acts as our Comic Con emissary, and has taught both drawing and Dungeons and Dragons for the recreation department.

Footnote: Have you seen toonopedia?

One of our summer quests sends the reader in search of ancient history, fiction or non-fiction, but you don't have to be a quester to enjoy a good book about Greece or Machu Picchu.

If you are interested in Druids you could go to 936.2 for The Life and Death of a Druid Prince, walk over to the fiction section for The Druid King by Norman Spinrad, check the children's room under 741.5 (comics) for several Asterix collections, and return to the adult side to sample some fantasy by Terry Brooks.

Ancient Egypt? Sit down in the reference room with Atlas of Ancient Egypt (R 932). Look for Cat Mummies (J 932) in the children's room, and while you are in there check out For All Time by Caroline B. Cooney, or Pharaoh's Daughter by Julius Lester (both J Fic). Over on the adult side you can find several fascinating non-fiction books such as Reflections of Osiris : Lives from Ancient Egypt (932.1), and finally settle down with a novel by Arthur Phillips or one of the many mysteries of Elizabeth Peters. Though we don't have a copy of Norma for the Druid enthusiasts, we do have some extracts from Aida.

And so on. Whatever part of ancient history interests you, you can look through art books, history books, fiction, atlases (check the atlas case too), biographies.

O mihi praeteritos referat si Iuppiter annos. Here are some sites that will lead you more deeply into ancient times:
Museum of Reconstructions
Kidipede for kids and teachers, organized by a history professor (fun for adults as well)
Ancient History Sourcebook
The Classics Address your questions about Greece and Rome to the Oracle of Loxias

Stranger in a Strange Land, first published in 1961, was read by many, many people who did not usually read science fiction. It won a Hugo, and introduced the word grok to the '60s.

Here is an ad-free list of novels that won Hugo awards.

2006 Spin by Robert Charles Wilson
2005 Jonathan Strange and Mr. Norrell by Susanna Clarke
2004 Paladin of Souls by Lois McMaster Bujold
2003 Hominids by Robert J. Sawyer
2002 American Gods by Neil Gaiman
2001 Harry Potter and The Goblet of Fire by J. K. Rowling
2000 A Deepness in the Sky by Vernor Vinge
1999 To Say Nothing of the Dog: Or How We Found the Bishop's Bird Stump At Last by Connie Willis
1998 Forever Peace by Joe Haldeman
1997 Blue Mars by Kim Stanley Robinson
1996 The Diamond Age: Or, a Young Lady's Illustrated Primer by Neal Stephenson
1995 Mirror Dance by Lois Mcmaster Bujold
1994 Green Mars by Kim Stanley Robinson
1993 A Fire Upon the Deep by Vernor Vinge; Doomsday Book by Connie Willis
1992 Barrayar by Lois McMaster Bujold
1991 The Vor Game: The Continuing Adventures of Miles Vorkosigan by Lois McMaster Bujold
1990 Hyperion by Dan Simmons
1989 Cyteen by C. J. Cherryh
1988 The Uplift War by David Brin
1987 Speaker for the Dead by Orson Scott Card
1986 Ender's Game by Orson Scott Card
1985 Neuromancer by William Gibson
1984 Startide Rising by David Brin
1983 Foundation's Edge by Isaac Asimov
1982 Downbelow Station by C. J. Cherryh
1981 The Snow Queen by Joan D. Vinge
1980 The Fountains of Paradise by Arthur Charles Clarke
1979 Dreamsnake by Vonda N. Mcintyre
1978 Gateway by Frederik Pohl
1977 Where Late the Sweet Birds Sang by Kate Wilhelm
1976 The Forever War by Joe Haldeman
1975 The Dispossessed: An Ambiguous Utopia by Ursula Le Guin
1974 Rendezvous With Rama by Arthur Charles Clarke
1973 The Gods Themselves by Isaac Asimov
1972 To Your Scattered Bodies by Philip Jose Farmer
1971 Ringworld by Larry Niven
1970 The Left Hand of Darkness by Ursula Le Guin
1969 Stand on Zanzibar by John Brunner
1968 Lord of Light by Roger Zelazny
1967 The Moon Is a Harsh Mistress by Robert A. Heinlein
1966 Dune by Frank Herbert; This Immortal by Roger Zelazny
1965 The Wanderer by Fritz Leiber
1964 Way Station by Clifford D. Simak
1963 The Man in the High Castle by Philip K. Dick
1962 Stranger in a Strange Land by Robert A. Heinlein
1961 A Canticle for Leibowitz by Walter M. Miller
1960 Starship Troopers by Robert A. Heinlein
1959 A Case of Conscience by James Blish
1958 The Big Time by Fritz Leiber
1957 -
1956 Double Star by Robert A Heinlein
1955 They'd Rather Be Right by Frank Riley
1954 -
1953 The Demolished Man by Alfred Bester

Hugo awards by catagory, but this list is not up-to-date.

Dinosaurs rule at the Takoma Park Md. Library! We’ve got 70 books in the main Dewey Decimal number for dinosaurs 567.9. Some of these books are in the adult section, some in the reference room, but many are on the shelves in the Children’s Room. Among these books are Dinosaur Discoveries by Gail Gibbons (J 567.9 GIBBONS), The Dinosaur Atlas by Don Lessem (J 567.9 LESSEM) and The Ultimate Dinosaur Book by David Lambert (J 567.9 LAMBERT).
In addition to these books full of dinosaur facts, we’ve got lots of other types of dinosaur books, from poetry featuring dinosaurs to dinosaurs who star in some beginning readers. Here are some other titles to look for:

Interested in local dinosaurs, ones found around here, in DC or Maryland? We have two books by Peter Kranz: Dinosaurs in Maryland and Dinosaurs of the District of Columbia Look carefully at the Dinofund site. You can even go on a dino dig with them in the Washington Metro area !