The Postal Service even published a bit of background on the books. Read the back of your sheet of stamps (you will probably need a magnifying glass) and the bottom half of this page.

Two of the characters, Maisy and the Caterpillar also appear on a Royal Mail set issued at the same time. Also on the Royal Mail set but not on ours - Kippur the Dog, the White Rabbit, Jeremy Fisher, Paddington, The Enormous Crocodile and Boots.

If the Takoma Park post office runs out you can buy the stamps online. 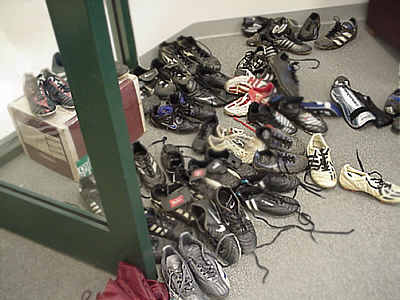 Soccer and baseball registration (and another shoe exchange?) will be held again in the computer center this weekend - Friday evening at 6 and Saturday morning at 10. On Saturday you can then come over to the library for soccer or baseball books - we have a lot of good ones in both the children's and adult collections. The Dewey number for soccer is 796.334, the Dewey number for baseball is 796.357. Be sure to check the catalog for baseball - fiction and soccer - fiction. (And for books about shoes.)

'No Future' was a rallying cry for many Punk-era youth in the 1980's, but over time it's proved to be an iffy choice as a mission statement. Many counterculture kids find themselves years later with little to show for their commitment to the hardcore beyond an armful of tattoos and a resume of treatment at various addiction programs.

Recovering addict and California punk pioneer John Albert found redemption in Rec League baseball. Despite a tendency towards self-isolation and 'anti-'-ism he discovered a subversive satisfaction in participating in something so relentlessly wholesome as a game of summer ball. His teammates have similar mongrel pedigrees and hard luck stories, but the warmth of his fondness for them is antiseptic as sunlight. Good book, I really liked this one.

This children's book won a 2006 award for Mildred L. Batchelder Award for outstanding translated by Michael Hofmann. I am shocked that it won this award.

I found it slow and tedious with either the writing, editing or translation terrible. There were dangling sentences and the writing was dry with no life. I did not feel it "allows readers to understand the horrors of war" (Napoleonic), but rather found that the writing which reads like a Dick and Jane book, made war dull and boring - hard task to accomplish.

I agree with the reviewer from Booklist on this.

The author was stuck in a prolonged mope (of a very British sort) until by chance he met a bearded man on a bus who suggested the following prescription for happiness: "Say yes more..." According to this fellow, opportunities for happiness come to people who are open to them. You never know what may come if you try something new.

Never one to do things by half, professional enthusiast Danny Wallace threw himself into the mission: until the end of the year he would say yes to every suggestion or direct question that came his way. Adventures and near-catastrophes ensue.

Travelogue, cautionary tale, love story, whatever: it's a delightfully loopy book. Wallace is charming, empathetic, and occasionally, simply pathetic. There seems to be a small but growing collection of books in the sub-genre of 'bar bets taken too far' (see Tony Hawks' 'Round Ireland with a Fridge'-- 914.15 HAWKS) but so far I haven't met one that failed to entertain. Maybe I'm just a sucker for that sort of thing.

Either way I highly recommend this one.