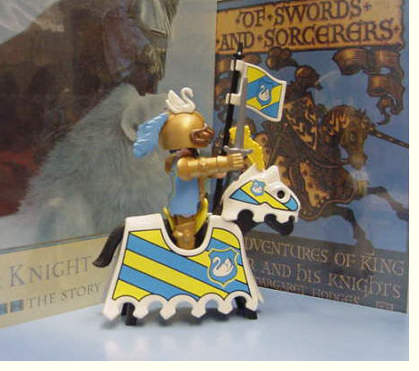 We have well over 100 fiction titles with a Knights and Knighthood subject tracing. We probably have many, many more as our adult fiction did not receive subject tracings until recently.

FIC KAFKA The castle Not really about the castle as a building, about a bureaucracy that is sealed up, impenetrable, within a castle. A dystopia. Video games were based on it and The Prisoner had a similar plot.)
FIC BONHOTE Bungay Castle : a novel by Elizabeth Bonhote
J PA Castle by Garth Nix.
J FIC NESBIT The enchanted castle by E. Nesbit ; illustrated by Betty Fraser.
FIC SMITH I capture the castle by Dodie Smith. A Bildungsroman. The movie is good too.
J FIC EAGER Knight's castle, Edward Eager ; illustrated by N.M. Bodecker.
FIC CERVANT Don Quixote Miguel de Cervantes
FIC MARTYN The knight and the rose Isolde Martyn.
SF DAVID Knight life by Peter David.

Look for these as well.

__ The Amazing Felix by Emily Arnold McCully
__ The Battle for the Castle and The Castle in the Attic by Elizabeth Winthrop
__ The Knight At Dawn (part of the Magic Tree House series) by Mary Pope Osborne
__ Nora's Castle by S. Ichikawa
__ Pure Dead Magic and Pure Dead Wicked by Debi Gliori
__ Two Tamora Pierce series (one has First Test, Page, Squire and Knight, the other is the Alanna series)
__ Bella At Midnight by Diane Stanley
__ Good night, Good Knight by Thomas (it's a reader)
__ The Knight and the Dragon by Tomi DePaola
__ Knights of the Kitchen Table (part of the Time Warp Trio series) by Jon Scieszka
__ The Princess Knight by Cornelia Funke

J 398.22 MALORY The book of King Arthur and his noble knights Stories from Sir Thomas Malory's Morte D'Arthur We have several editions.
J 398.22 PATERSO Parzival : the quest of the Grail Knight retold by Katherine Paterson.
J 398.22 MORPURG Sir Gawain and the Green Knight as told by Michael Morpurgo ; illustrated by Michael Foreman.
J 398.22 PYLE The story of the Grail and the passing of Arthur and other titles by Howard Pyle

And many, many other Arthurian romances. Just look under the subject tracing Arthurian Romances - Adaptations and you will find 46 titles.