T&T with the Police

Tonight Cpl. Smith of the Takoma Park Police will escort Halloween Trick & Treaters along this route:

And what is happening in the library today? (Photos)

Jill Feasley keeps a yearly tally. Here is her list for 2007.

The (rough) Costume Break-down (it's hard to remember all the costumes when a big group of kids comes up):

Outside the library, at 101 Philadelphia Avenue, a giant bin awaits your October nut collections.
1. Each bag should contain nuts from a single tree. Please don't mix them.
2. Don't take all the nuts from under a tree - the animals need them too.
3. Put in one leaf to help identify the tree.
4. Bags should be paper, not plastic.
5. Tags are available near the bin, but you will need a staple or something if you can't tie on the string.

What happens to your nuts? State nurseries will grow seedlings and then plant them out along stream banks . 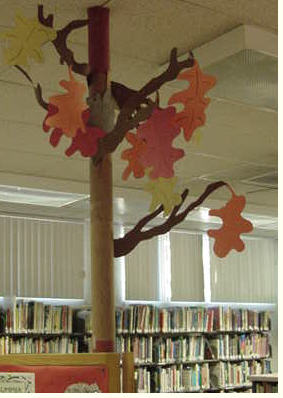 Growing Native (the sponsoring program)
The trees they want
What tree is it? A great key-type guide from the Ohio Division of Forestry
Virginia Tech tree fact sheets
Their list of Maryland trees

Of course you can pop into the library and check out one of our many tree books. We have lots, both in the J room and the adult collections. Most are in 582 or are nearby. (We also have a stapler and pens.)

Thank you all for your wonderful book donations but we can't accept any more. We've run out of room.

We are open today, though WTOP is reporting that area libraries and schools are closed.


"If you're thinking about using this time to catch up on some errands, consider this: Columbus Day is a federal holiday, which means all federal, state and local government offices will be closed including schools, libraries and courts"

"It's a federal holiday, which means all federal, state and local government offices are closed. Courts, banks and most post offices are also closed. The Merrifield Post Office on Lee Highway in Virginia is open until 5 p.m. and the Takoma Park Library is open."

Did you read David Pogue's article on the XO in the New York Times? (Now free online, but you may have to register) For jargon afficianados: The XO is AKA the OLPC computer - from the One laptop per child volunteer project.

Our library now has over three years experience with children using Linux computers, and we think the combination marvelous. But the XO's have a lot more than Linux to recommend them.
1. Designed for children, they are both cute and incredibly sturdy.
2. Battery life is something like 6 to 8 hours, but you can also power them mechanically or with a $12, 12" solar panel. And battery life is much longer if the child is using the unit to read a book.
3. Wifi is built in. So is a video camera.
4. Push one key and you can both see and modify the code behind a page or program. Think of the talent this will unleash. Brilliant.

These were created for children in developing countries. If you want one for your USA tot, you will have a short time window via the Give 1 Get 1 program. Pay $400 and you get one for the kid in your life, and one for a child somewhere else in the world who desperately needs it. Begins Nov 12.

Note: This is not the same as the Asus Eee PC which is also Linux based, also about 7 inches, and also rolling out this fall. (Review in French.) Unlike the XO, the Eee PC is commercial, will be publicly available and wasn't specifically designed for children in the developing world. And it isn't lime green, except in some photos from China.

With these small units you are going to need to tote a little extra portable storage or learn how to keep your files online. Get acquainted with something like Yahoo briefcase. (If you already have a Yahoo account for mail or groups, you also have a briefcase there.)

Thanks to RCN we have free wi-fi available in the library and next door in the computer area. We will be adding some small tables and wall trays there for the wi-fi users.

Update November 12: The Give One Get One program for the XO began on November 12th and will last through the 27th. The recipient, for the one you give, will be a child in Rwanda, Haiti, Afganistan or Cambodia.

Sample Lyrics (with a buggy display)


Speaking of lyrics, does anyone know the B&O Trestle at Takoma Park ????