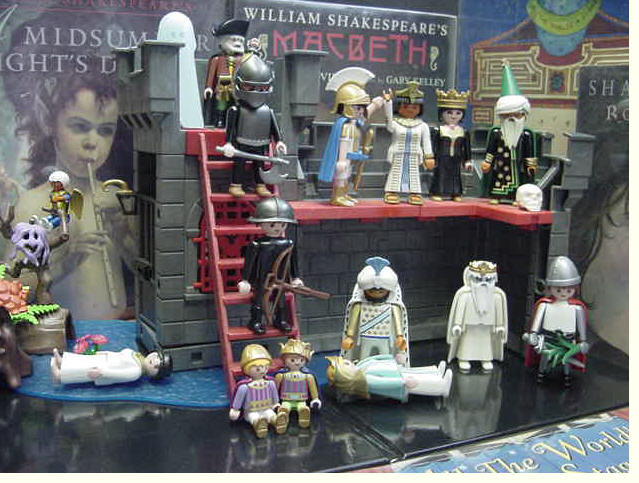 Not only are several people who drew the drama quest reading Shakespeare's stories, but others are choosing them too. The Tempest or Twelfth Night for calamities, specifically shipwrecks? Anthony and Cleopatra for ancient times? The Two Gentlemen of Verona for comedy or costume? Henry V for knighthood? We seem to be experiencing a small Shakespearean storm surge here.

822.33 is the number. The plays themselves can be found in the adult aisles, various interesting adaptations, often illustrated, in the J room.

Look for these on the adult side:
Clues to acting Shakespeare by Wesley Van Tassel (822.33 VAN TAS) Breath only at the punctuation marks ... and Will power : how to act Shakespeare in 21 days by John Basil and Stephanie Gunning (792.95 BASIL) Why different Deweys? No idea.
Shadowplay : the hidden beliefs and coded politics of William Shakespeare by Clare Asquith (822.33 ASQUITH)
A year in the life of William Shakespeare : 1599 by James Shapiro (822.33 SHAPIRO)
and scores more.

A Magic Treehouse book? Of course. Stage fright on a summer night by Mary Pope Osborne (J FIC OSBORNE)
A picture book? The boy, the bear, the baron, the bard by Gregory Rogers (J PIC ROGERS)

Remember - we have the Folger Shakespeare Library right downtown - exhibits, theater, garden, and a nice little shop with lots of books. Easily accessible by Metro.

UPDATE June 29th 2012:
One of readers recommends the following links: