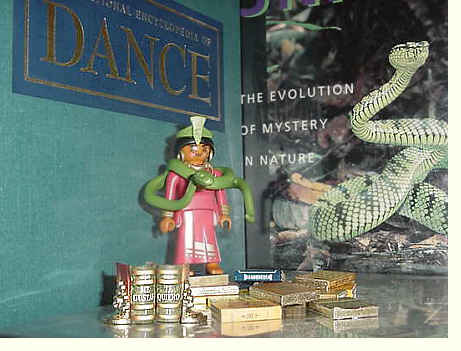 Most libraries over a certain size try to arrange their books in some predictable fashion. In the United States the two most common types of arrangement are the Library of Congress classification scheme and Dewey Decimal classification. Most academic libraries use the Library of Congress arrangement as it is best if you have a big library or lots of books on the same subjects. Most public libraries use the Dewey Decimal system. It works very well if you have a smaller collection with a lot of variety - and it is also easier for both library users and librarians to understand.

Does this mean books will have exactly to same Dewey numbers in a Montgomery County library or a PG library as they have here? No. They will usually have similar Dewey numbers, but the details may well vary. The Dewey system allows for considerable flexibility and each library tries to take into account the books they already have and where they sit on the shelves. We want to make it easy for you to find what you want by browsing - that is the whole point. Example: International Encyclopedia of Dance (6 vol.)
792.803 Takoma Park; Arlington; PG; DC; Falls Church
792.8 Montgomery County (probably the best number)
792.62 Ann Arundel

Melvil Dewey took all sorts of classification ideas in the air at the time, the 1870s, and came up with his structure. Based on the idea that the areas of knowledge can be categorized, Dewey settled on 10 major areas, each in turn divided into 10 subsections (the Dewey 100) and each of these divided into 10 sub-sub-sections (the Dewey 1,000). 000 to 999 = 1,000 numbers. Then you have a decimal point which can be followed a lot of other numbers which will give you additional information. All very elegant, all very Baconian. Full of secret codes.

What are the letters? Just the first letters of the authors surname. If you have several books with the same Dewey number you sort them out alphabetically by author's name. Libraries differ in how they note this.

If a book has a Dewey number does this mean it is non-fiction? No, no, no. Fiction fits into the scheme. The 800s are literature. Shakepeare's plays are in 822.33. Most libraries just pull a lot of the fiction off the Dewey shelves so you won't find half the library full of row after row of 800s. But be very, very careful. Don't make assumptions as to where a fiction book will be placed.

And on snake dancing?
A how-to
Edward Curtis and the Hopi snake dance
Health benefits

And where would you put a book on snake dancing? If the main focus is on the dance, in dancing. If on the snakes, with snakes. Now get up and dance.